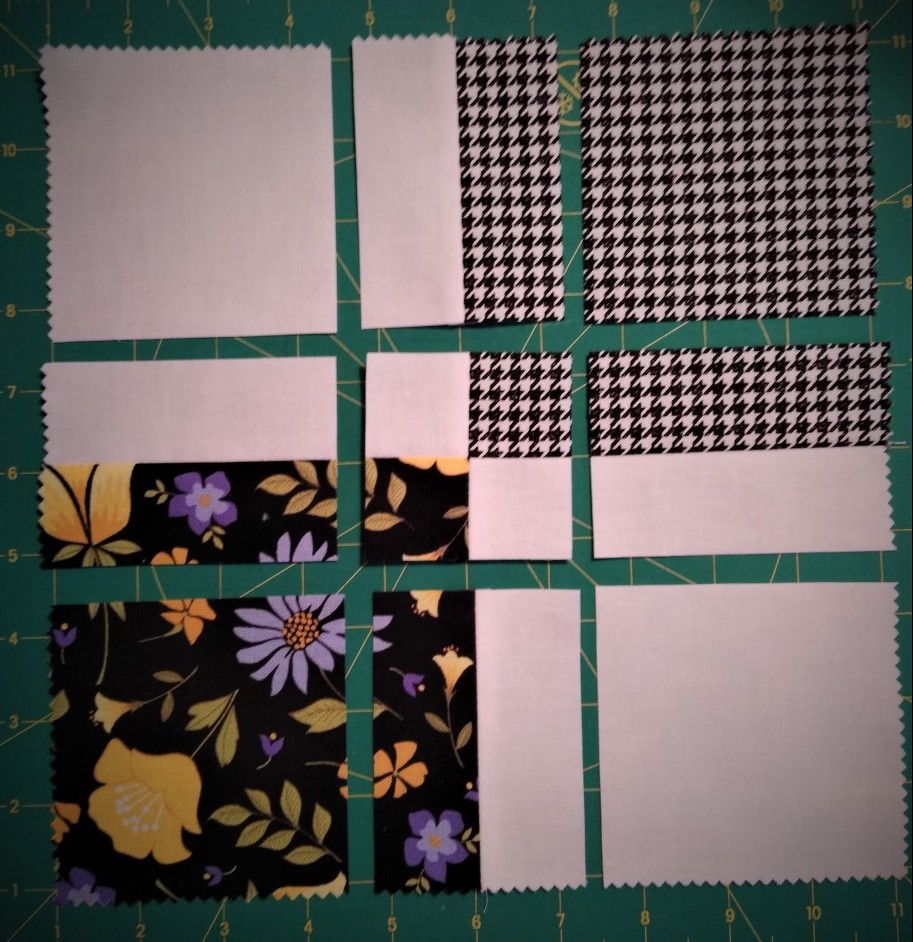 So, what exactly is a Disappearing Four Patch quilt block? Simply put, it is a basic four patch block with four additional cuts, and a turn of four (or five) fabric pieces. Eight additional stitch lines later and the result is a block that looks more complicated and time-consuming to make than it actually is.

And why make the four patches disappear?

As a beginning quilter, I was quite content piecing 5” squares however, after I mastered the skill of nesting seams, I wanted to try something a little more complicated but not as complicated as points and triangles. The disappearing four patch seemed to fit the bill.

This pattern is also a fun way to improve your basic quilting skills and help you bust through a stash of fabric scraps and the design is simple enough to allow you to create a small quilt from start to finish in one weekend.

Now on to the how!

For my project I’m using four 5” squares of fabric. 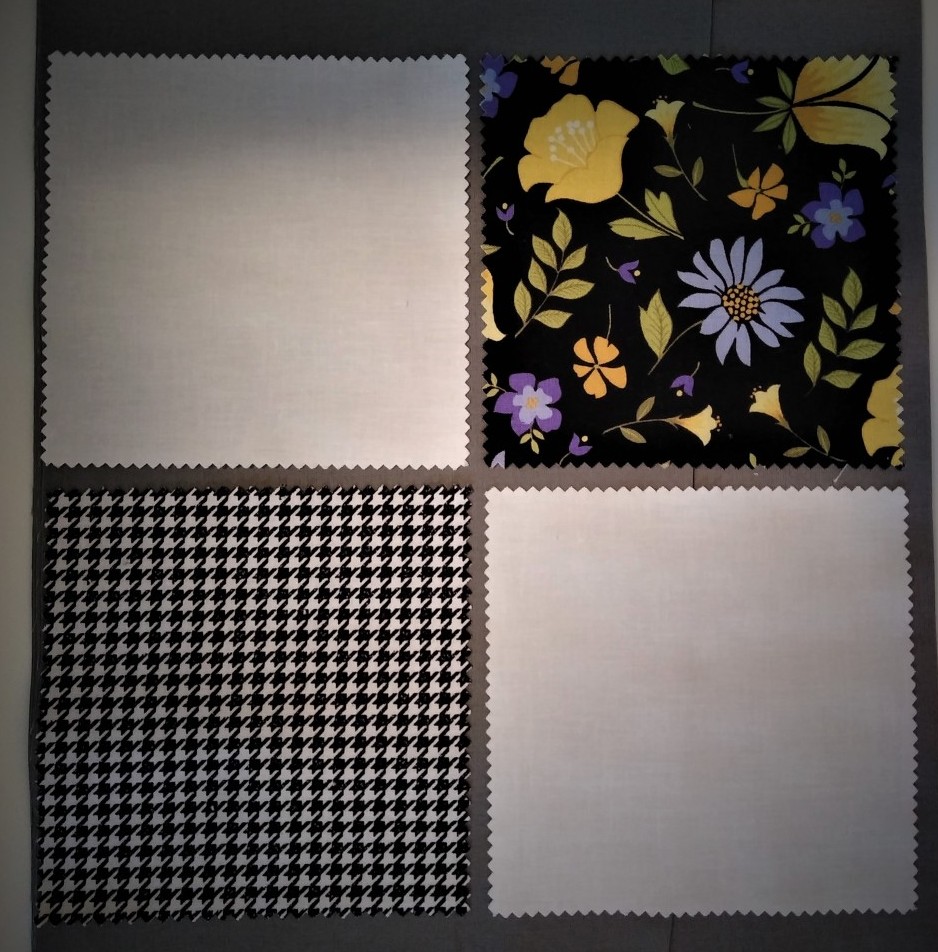 Step 1 : Place right sides of one solid and one print square together and sew a 1/4″ seam. 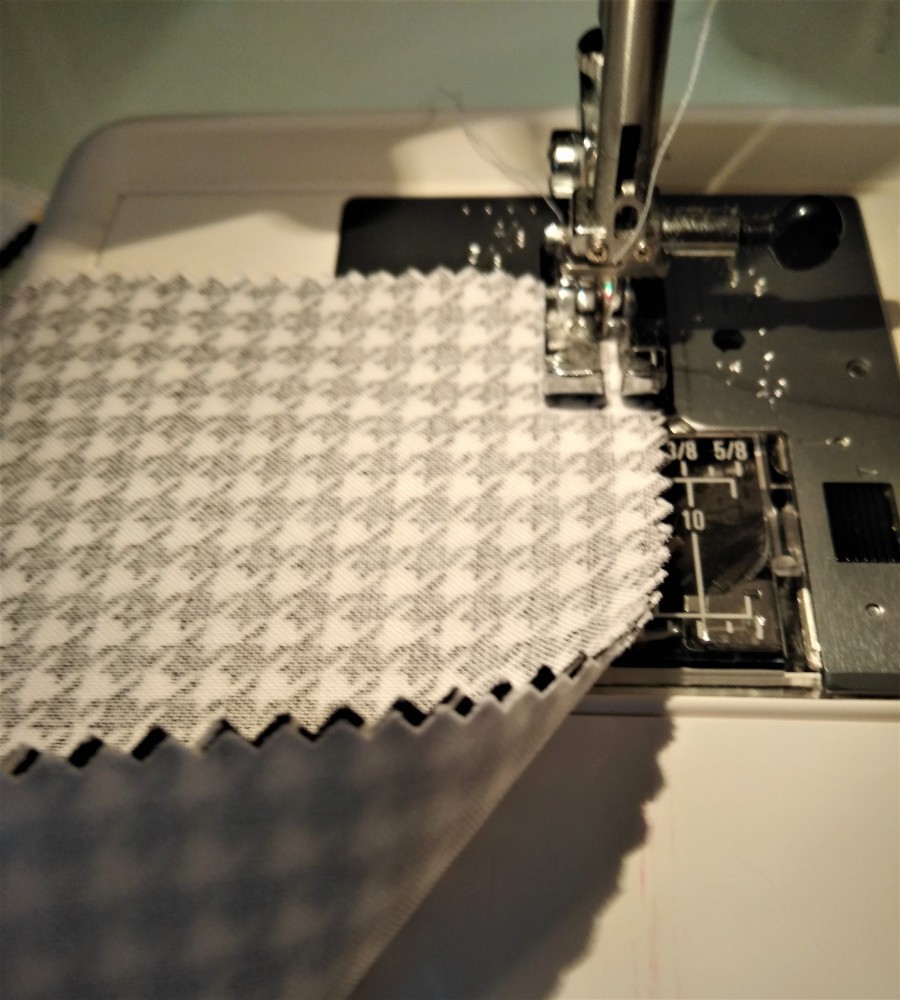 Repeat for the next set of squares. Press the seams toward the print side.

Step 2 : Position the top and bottom rows with right sides together and sew a 1/4″ seam . 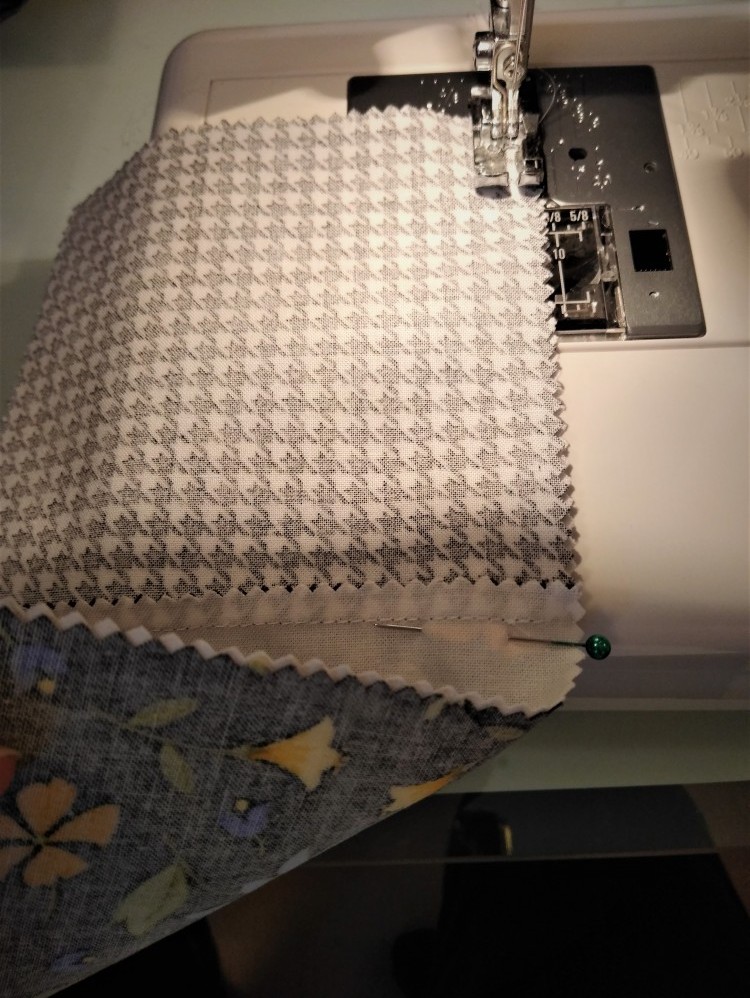 When ready to press I chose to press these seams open. This reduces the bulk of fabric and eliminates the need to remember to alternate the direction each is seam is pressed later on when I have additional rows to sew together. 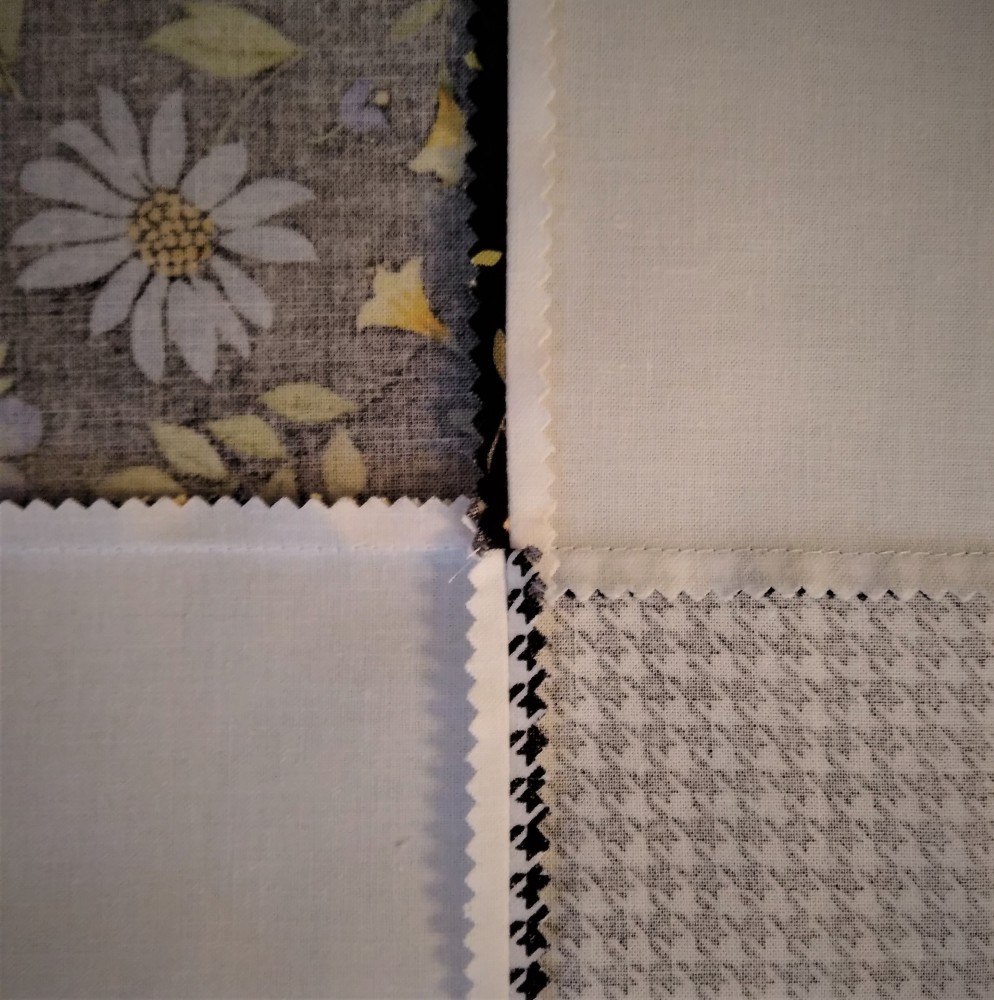 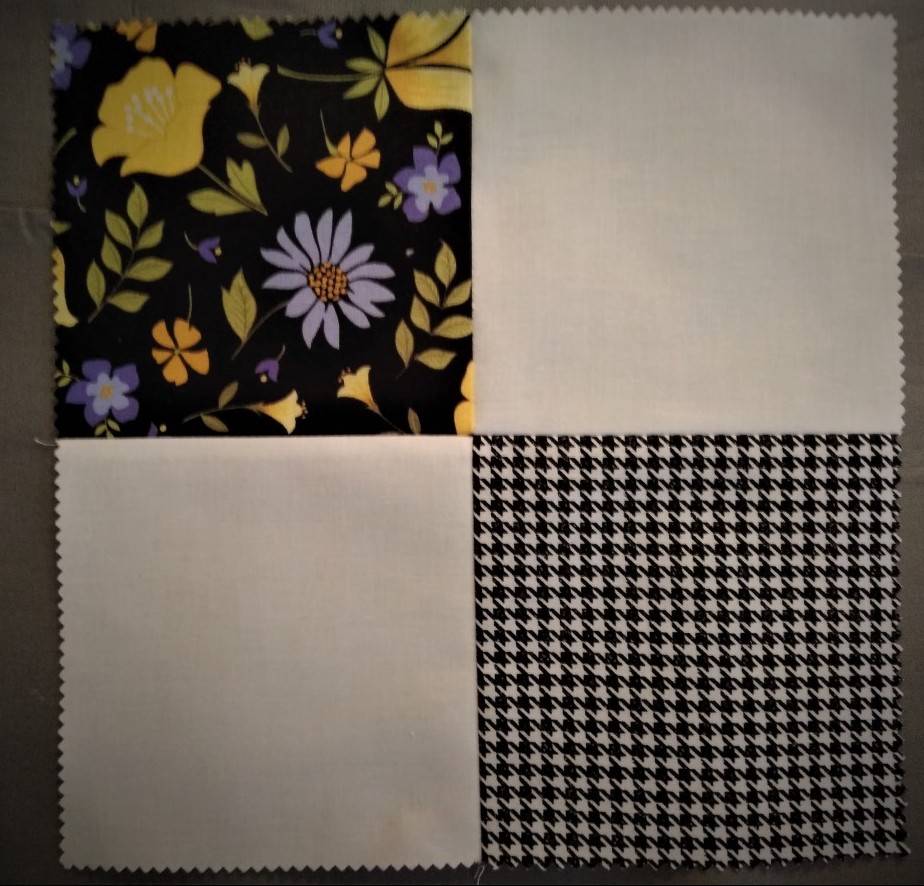 Step 3 : This is where a rotating cutting mat comes in very handy. Place the block on the mat and a ruler positioned on top to measure 1 1/4″ from the center seam. Along the right-hand edge is where you will make your first cut.

Using a rotating mat prevents you from having to move the fabric around – instead it is the board that moves – the best way to ensure accuracy and consistency with each cut. 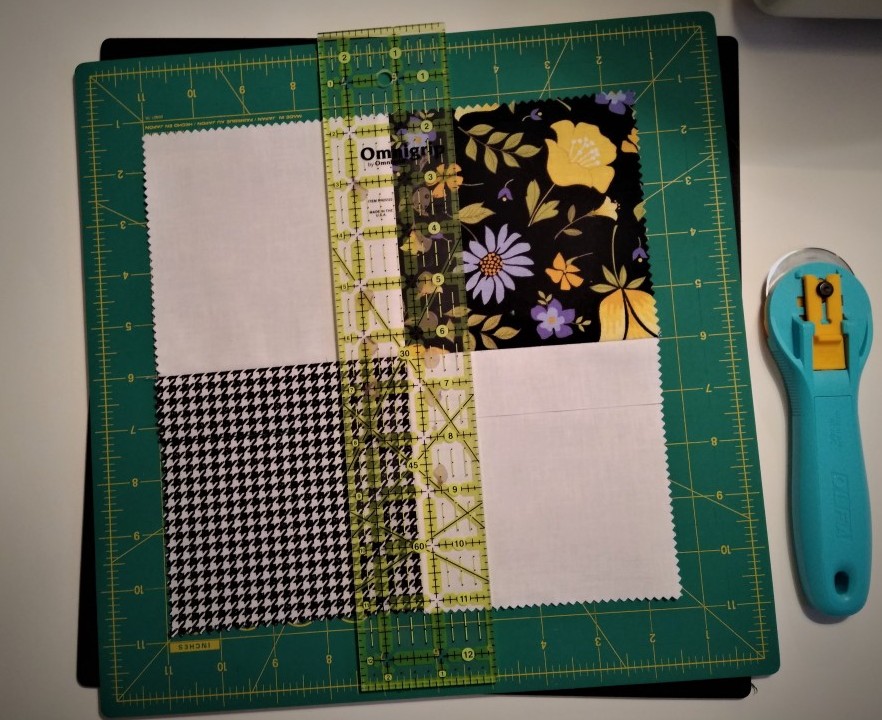 Then turn the board 45°, position the ruler again so the right outside edge is 1 1/4″ from the middle seam and make another cut through the top and bottom squares. Repeat this step twice again making a total of four cuts. The block will appear as shown in the image below: 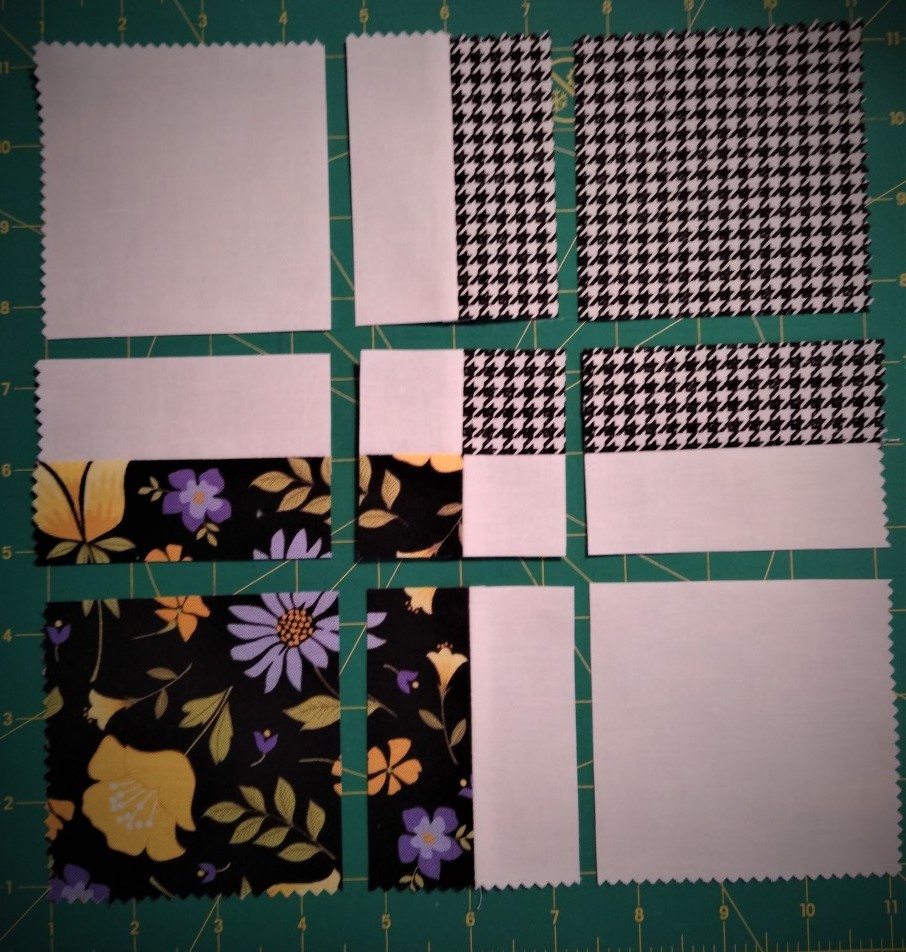 Step 4 : Once all four cuts are made it is now time to make the four patch disappear.

Simply take each middle strip set and turn around and turn the center square the same way. What you want to see now is an alternating pattern of print with solid. 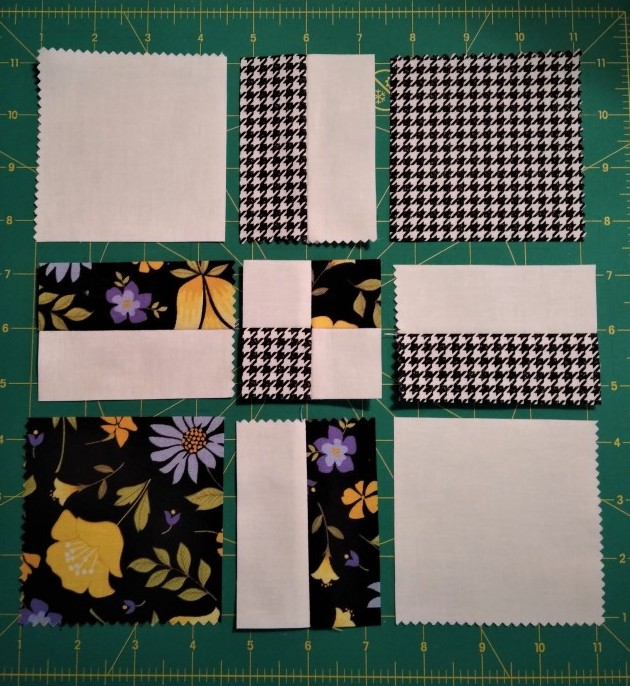 Step 5 : Sew each piece to create a row – there will be three.

Then sew the bottom to the middle row then add the top row to this set. Press the seams open – again this reduces bulk, especially in the seams that join in the middle of the block. 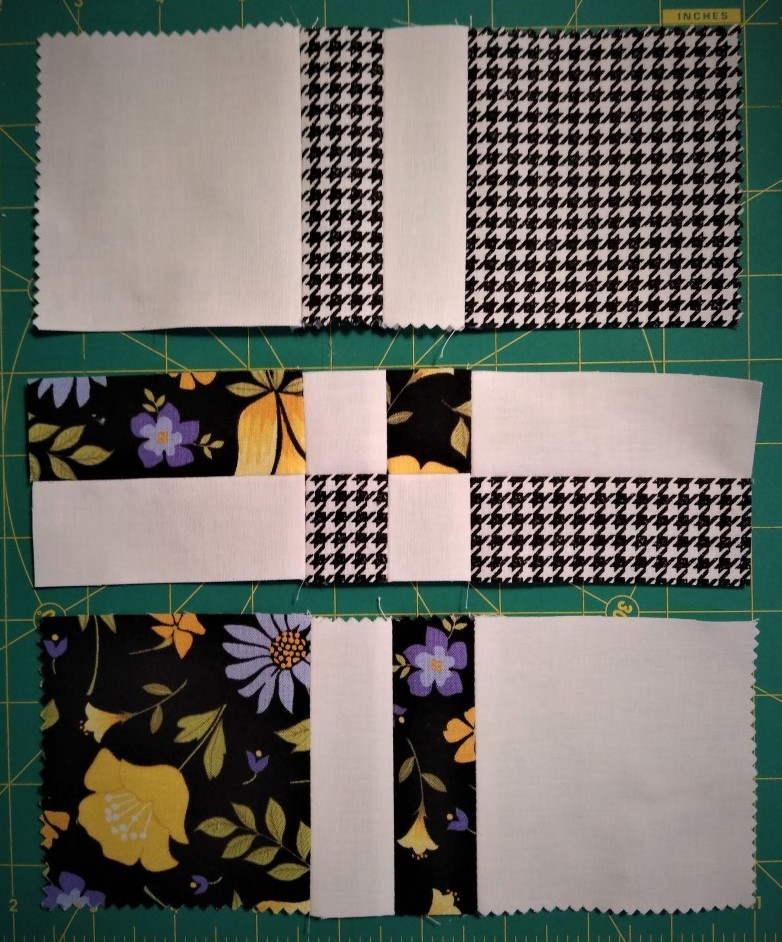 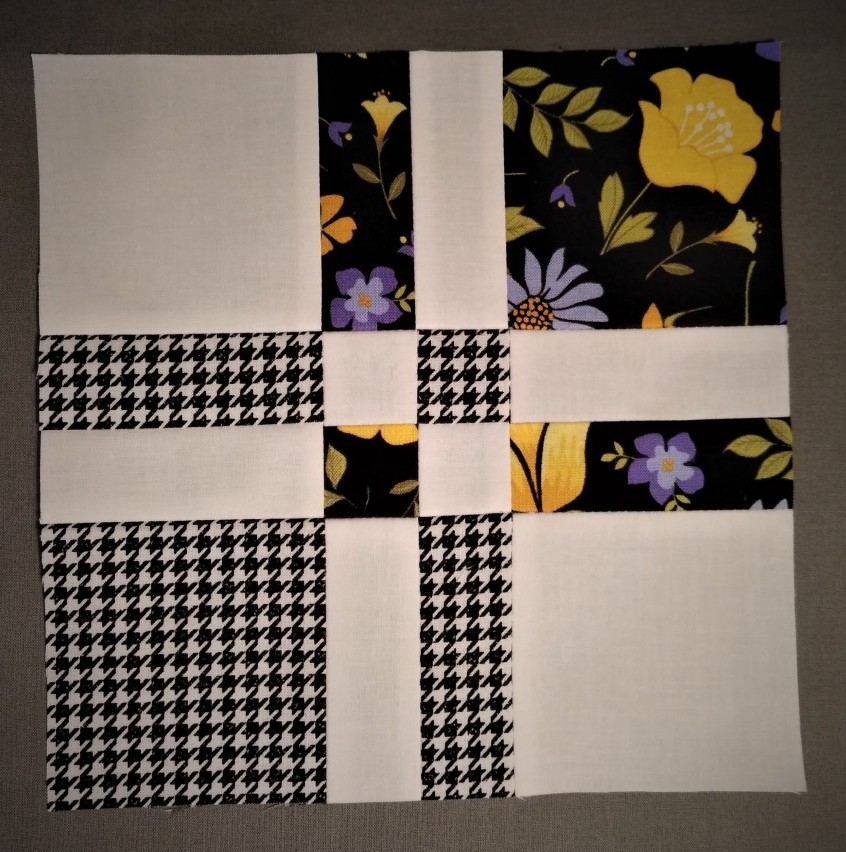 Using 5″ squares sewn together in this fashion results in a block can easily be trimmed to a 7.5″ or 8″ square – a nice number to use as part of a larger quilt.

The above example is just one variation of the disappearing four patch block design. Grab a few fabric scraps, sew four patches together and cut into (9) individual pieces. Then, take these pieces to your design wall and see how many configurations you can come up with! Create a design you like and sew it all together.

If making a quilt is not on your agenda, this block could easily standalone and be used for a number of other useful items. Add a back, banding and batting and this block is quickly transformed into a hot pad, pot holder or mug rug.

That’s the beauty of this pattern – there is no right or wrong way to piece these fabrics together. The appearance of the finished product is up to you!

Want more Disappearing Patch blocks? Stay tuned! My next post will illustrate many unique variations as well as interesting free motion and long arm quilt patterns that will make these Disappearing Blocks pop!

7 thoughts on “What is Better Than a Four Patch Quilt Block?”