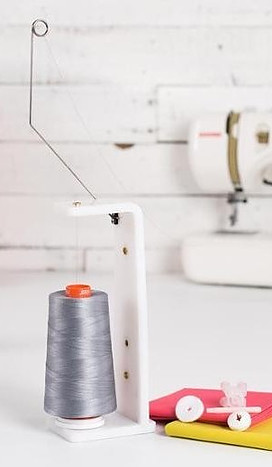 And Do I Need One?

In my last post I discussed my “Dream Quilting / Sewing machine” and thought I had covered all its positive elements and functions. However, I did omit one important item – the thread holder. The Juki TL2000Qi is designed to hold the larger spools and cones of thread that are wound onto the spool in a crosswise fashion. In fact, it will hold not just one but two spools at once. The machine I now use will only hold one standard spool (where the thread is wound in a straight, linear fashion). Thread that is wound onto a cone using the cross winding technique must be unwound from a vertical position. This prevents the thread from becoming too twisted and eventually breaking while sewing – the very last thing you want to have happen when doing the actual quilting. When you use this type of high end quilting thread with a low end sewing machine (as I have been doing) then the Superior Thread Holder Handy Stand is a must.

The main advantage is its size. Small enough to use with most any machine yet large enough to hold varying sizes of thread spools and cones up to 3.5″ diameter.

Another is in the design itself. A movable “pin” allows for several configurations. See the images below for a better explanation. In each illustration, no matter the thread spool orientation, the thread is unwinding vertically (straight up). 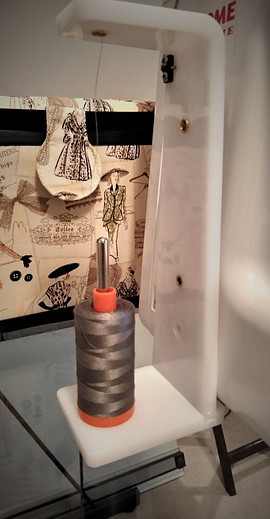 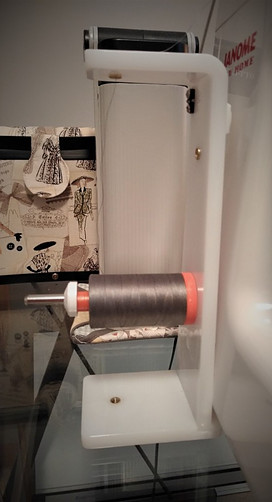 I tried other alternatives thinking I could make a better mouse trap and save a little money and I may have succeeded if I had all the right tools at my disposal. My first idea was to simply place the cone or spool in a tall, narrow cup or glass. This led to my second idea – use a cup and dowel stick inserted in the middle of the spool. The purpose being to stabilize the spool so it doesn’t wobble hopelessly off balance. That didn’t work so well either. My last idea (and the one I used for quite some time) was to take a plastic cup with a screw on lid plastic with a hole and removable straw. I removed the straw and threaded the thread up through the top. However, after a while this whole set up was becoming annoying. The cup I was using was a little too big, too unwieldy and too top-heavy.

It was time to do this right. A new sewing machine is not yet in the cards but a Superior Thread Holder Handy Stand is.

I’ve been using it for almost a year and have very few complaints. But to continue with subject – complaints. My main issue was the lack of instructions. I had a general idea of how it was supposed to work but I had to do a little research on quilting thread to fully appreciate why cross-wound thread had to be unwound vertically.

Next question: which position should I place the spool of thread; which is best and why. The tension wire is also adjustable but how do I determine its best position?

The answer: Trial and Error.

Referring back to the images above, I found it best to position the back of the holder firmly against the back of the sewing machine. My machine rests on top of a table and it is easy to adjust the tension wire so it is positioned in approximately the same level as the machine’s integrated spool holder. This mimics the same feed direction as if the thread were coming off a standard, horizontally positioned spool. 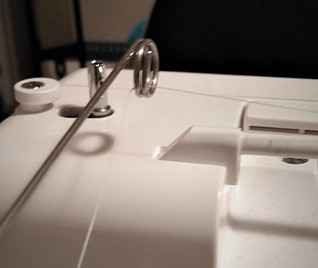 If your machine is set into the table-top or cabinet where the machine bed is flush with the table you can still position the Superior Thread Holder Handy Stand in back of your machine but you may need to move it out a couple of inches. This will allow plenty of space to lower the tension wire to it remains at the level of the machines integrated spool holder.

Another option would be to mount it on a wooden block if the entire holder needs to be higher. This will also provide additional stability – something that isn’t necessary but would make the overall product feel more substantial.

To save you time and prevent unnecessary frustration I’ve offered these suggestions based on what works for me and hope this will work for you as well.

If anyone reads this has a better or more authoritative answer regarding the best way to use the Superior Thread Holder Handy Stand please leave a comment below!