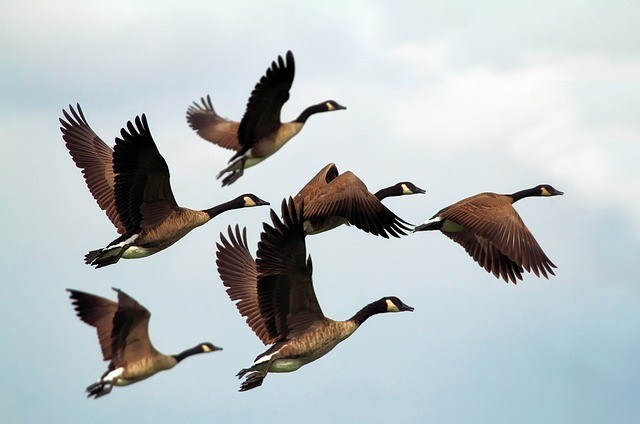 Here we are, mid- April and it appears (I say cautiously) that winter weather has finally come to an end. Predictions for snow for this past weekend veered north, I have tulips and daffodils in full bloom so there – I declare winter is officially over!

Another end-of-winter event is also occurring – the Canadian geese are in full flight headed North in search of food and shelter. Their V-shaped flocks are a classic sign of migration – a sight I find both majestic and mesmerizing.

As I continue onward and upward with my Adventure Quilt, I am returning to block 8 which largely consist of a classic pattern aptly named Flying Geese. Like birds during migration I have seen many, many images of “Flying Geese” fabric units but until embarking on this quilt adventure, I had not attempted to piece this eye-catching pattern.

So, after spending a couple of hours learning how to make a Flying Geese unit, I can say my Adventure Quilt is “migrating” right along!

The image below shows a majority of the quilt blocks I’ve completed. I made an attempt to arrange them to look like the finished quilt on the right.

There is LOT going on here, in terms of color and shape so I’ve indicated the actual Flying Geese units with a black oval-shaped circle to allow you to better see where and how this block unit fits into the grand scheme of this quilt. And as a bonus, I’ve placed an image of the finished quilt so we can all see the end goal of this quilt project! 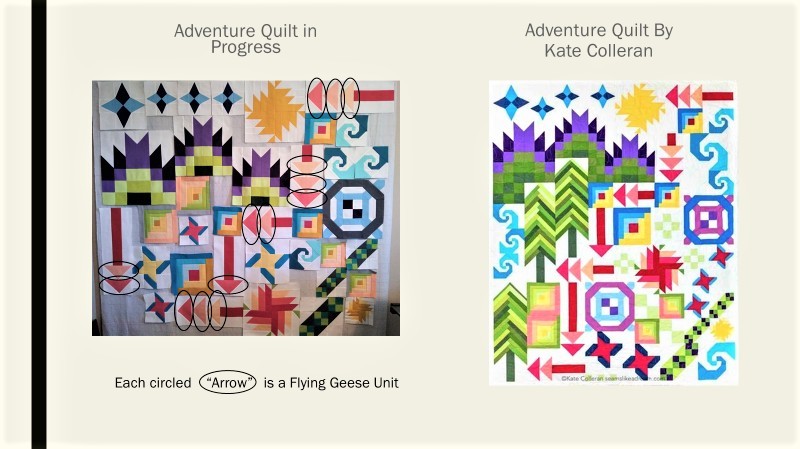 While piecing these units, I became curious about other methods to create this block or pieced unit. A quick Google search query: “How to make a flying geese fabric unit for quilting” returned many results in various formats including written tutorials and videos. From the first page of results there were three or four methods shown most often – each with its own list of Pros and Cons. What follows is a short summary of my findings:

This method is likely the oldest, but it is tricky. Each triangle is cut – on the bias – which means a great deal of care needs to be taken to prevent the pieces from stretching while stitching. I am assuming the sheer frustration among early quilters trying to keep all those triangles from stretching reached a boiling point resulting the methods listed below. It is easy to see how the evolution of this technique has made the Traditional method almost, if not entirely, obsolete.

To me, this method looks like the easiest. It consists of one rectangle, (the “goose”) and two squares, (the “sky”). The diagonal stitches are made and then the excess is cut away. No cutting or stitching on the bias = no stretching of any piece and the desired size and shape is maintained. There is more about this method in the second tutorial below.

Of all the methods listed, this one has the greatest potential to create the most perfect flying geese units. The downside, if you are not familiar with paper or foundation piecing then you will need to learn this process first. This, is a good place to start.

If you are an absolute perfectionist, then this is the method for you!

This is the method I used as it was the method illustrated in the Adventure Quilt Along. And believe me, there is no waste! 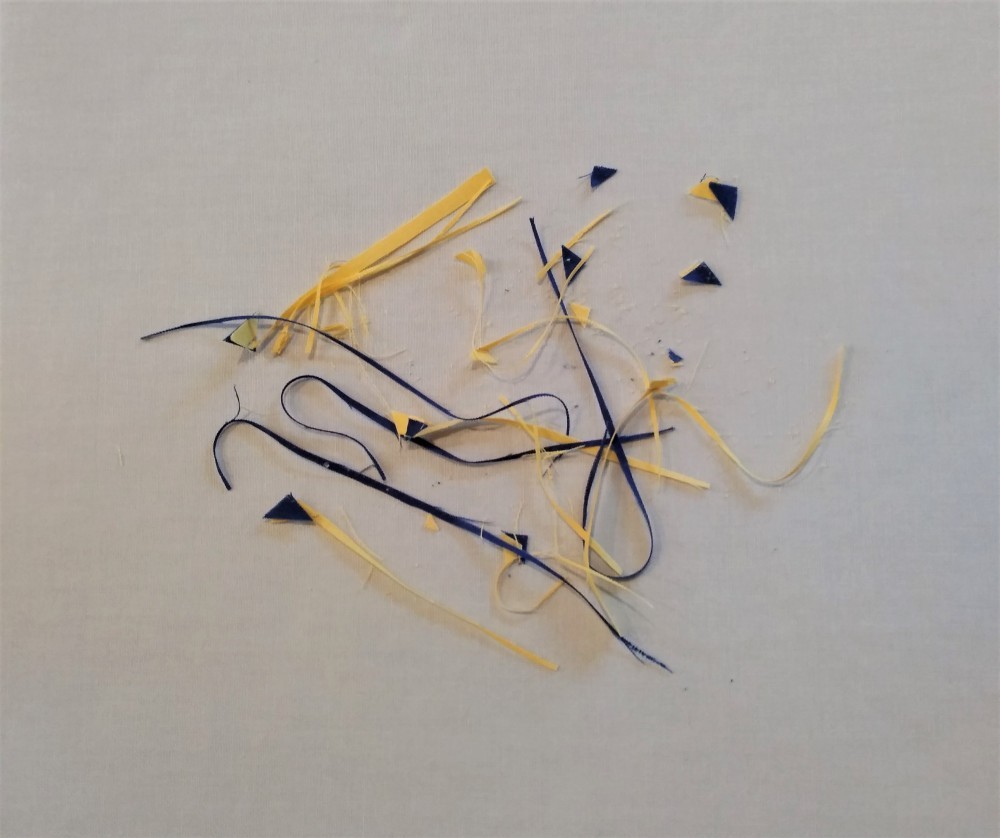 See what I mean! What you see above is pretty much the only waste after piecing FOUR flying geese units which measured approx. 2 1/2″ x 4 1/2″.

The downside: no wiggle room for an inaccurate seam or cut. You need to start with accurate cuts and sew a consistent scant 1/4″ seam. The result is a unit that only requires a quick trim of the extending points so the “Wing Clipper” ruler is not needed.

I like the No-Waste process and appreciate the fact that such a minimal amount of fabric is wasted but I was curious about the Coner Triangle method and decided to give it a try. This way I could compare the two methods to determine the advantage of using one method over another.

This method involves several steps so in an attempt to simplify the instructions I’ve compiled a few images into a quick tutorial: 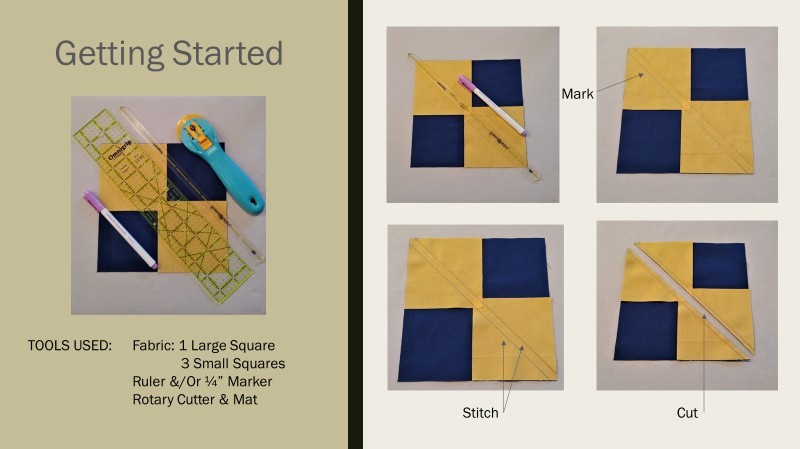 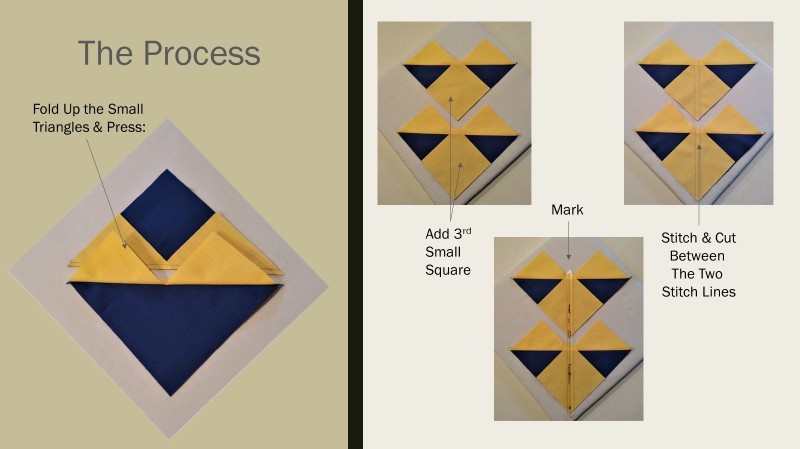 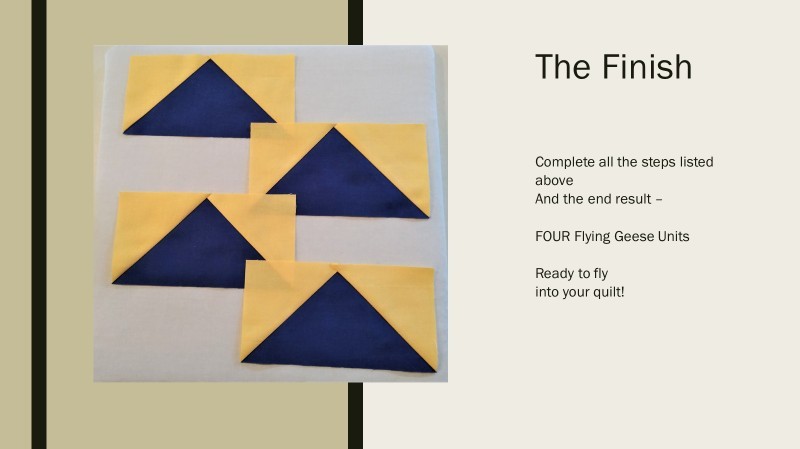 Same as above except the unit is squared using the Wing Clipper Ruler. Cutting the fabric pieces a bit larger than instructed gives you the extra fabric needed to use the Wing Clipper ruler to get the flying geese unit the perfect size. 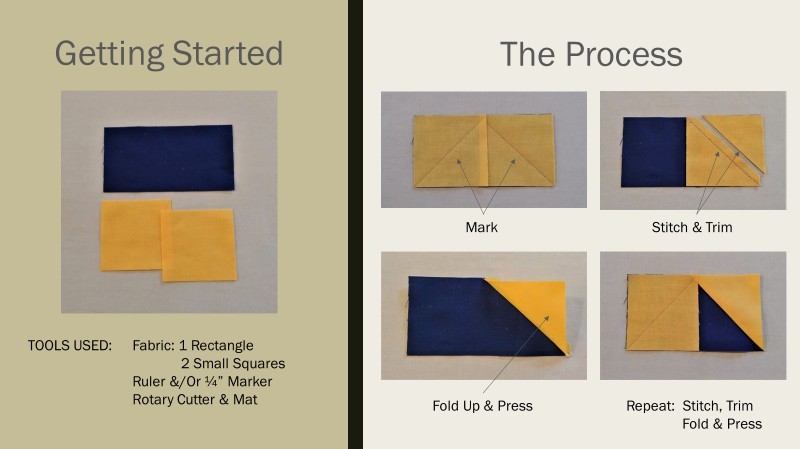 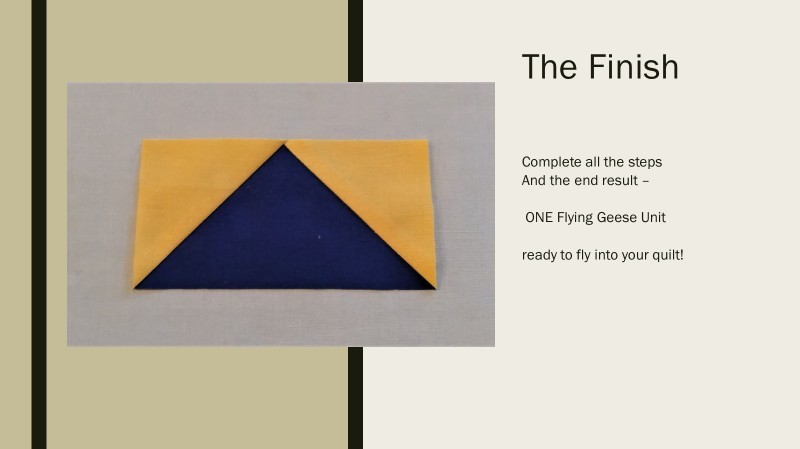 My Take-Away Comparing the No-Waste and Corner Triangle Methods

When you have a pattern calling for several flying geese units of the same size and at least four of those units are to be the same color, the no-waste method is the way to go. Once you are comfortable with the technique and develop a piecing rhythm the result are four units, pieced at once and in a relatively short period of time.

The corner triangle method is faster (from start to finish) however, you can generally only make one unit at a time. I haven’t attempted to time these two methods however, I am thinking you could churn out four flying geese units using the corner method in about the same amount of time as it takes to create four units using the no-waste method.

For fun, has anyone ever set a stop watch and timed to compare these two methods?

Although I am curious, I lack a sufficient level of curiosity to take on this challenge myself so for anyone who reads this and is also curious and has the motivation to do a timed comparison please feel free to post your result in the comments below.

Each one of us who spends a significant amount of time in “Quilt World” is always on the look out for a more efficient way to use our time, money and resources!